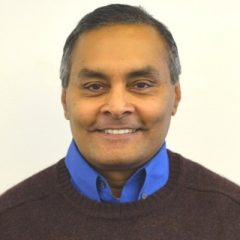 Somnath Sengupta, the founder and President of Powerhouse Consulting Group (Powerhouse), is a MIT trained researcher with over 30 years of experience in research and development of material solutions for the department of defense. He brings forth the highest quality of communication and mentoring skills in a multicultural background that has helped him develop strong professional relationships- domestic and international. Dr. Sengupta has 25 years of aggregate teaching experience, 20+ published papers, 19 patents, with 7 additional patent applications pending. He has received the R&D 100 Award, Technology Transfer Award, and the BAE Systems Chairman’s Award.

From 2015 till present, Powerhouse has been under contract with the Defense Threat Reduction Agency and then the Office of Naval Research for developing scalable material solutions for the warfighter. Dr. Sengupta has also advised the US Army Research Laboratory and US Navy inventors in the areas of commercialization of their Intellectual Property (IP) and entrepreneurial mentoring services to start ups and small businesses wishing to commercialize the IP.  He is invited to speak in many entrepreneurial forums.

From 2016 till present, Dr. Sengupta has been training adults with autsim on sustainable life skills and job skills for entrepreneurship or job placement in STEM related fields. He works closely wit many businesses and the department of defense to develop a sustainable workforce.

From 2004 through July,2015, Dr. Sengupta was a Senior Program Manager and then a Technology Development Manager at BAE Systems. In 2008, he won the BAE Systems Chairman’s Award for successful capture and program execution of a DARPA contract.

From 1998 to 2004 he was with Paratek Microwave, Inc in Columbia, Maryland. He co-founded Paratek Microwave, a successful technology transfer from the US Army Research Laboratory, which provided tunable components for hand held devices, smart scanning antenna systems and miniaturized RF front-ends for multi-function, multi-frequency wireless devices and markets. . Paratek was awarded the 2002 Federal Laboratory Consortiums Technology Transfer Award for Excellence in Technology Transfer. Paratek was acquired by Blackberry® in 2012 .

From 1993 to 1998 he was with the Army Research Laboratory (ARL) in Aberdeen, Maryland. As an Electrical Engineer, he established and managed a team for the research and development of cutting edge electronically tunable thin film technology. He was accountable for attracting funding & talent, and managing R&D efforts for the development of tunable RF components and scanning antennas.

From 1990 to 1992 he was a post-doctoral associate at the Center for Materials Science and Engineering at the Massachusetts Institute of Technology in Cambridge, Massachusetts . At MIT, he worked on the crystal growth and characterization of fluoride and super conductor single crystals. He collaborated with MIT Lincoln Labs, AT&T Bell Labs and IBM Labs to conceive, conduct and publish research on high-temperature superconductors for electronic applications. The goal was to conduct successful research while also gaining publicity and recognition for the work to encourage consortium partners to use the new technology.

From 1985 to 1990, he was a doctoral candidate at the University of South Florida (USF), Tampa, Florida . At USF, he conceived, designed and established the first fiber laser growth facility of its kind, demonstrated the first miniature solid state laser with high conversion efficiency, and published five research papers in refereed journals & presented findings at conferences around the world. He has previously held a US government security clearance.

From 1981 to 1983; Somnath attended the Indian Institute of Technology, Kharagpur , India where he earned his MSc degree in Physics with a focus on Nuclear Physics.